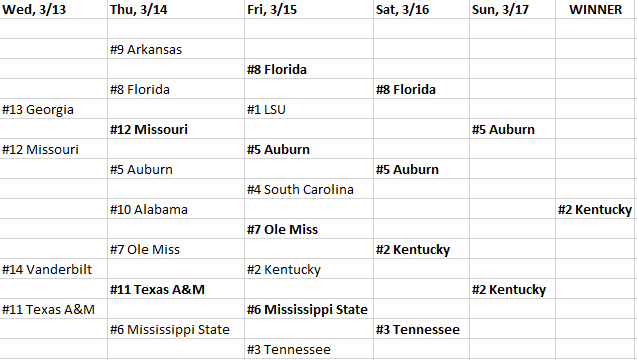 I’m calling for a big upset in the Quarterfinals out in Nashville: I’ve got Florida over LSU. The Gators sit as my final 11 seed right now, the fifth to last team in the field, so factor in some bid stealers and UF could really use one last win to push them over the top, and what better than a win over the SEC regular season champion? Both of the games LSU and Florida played against eachother this year went to overtime, splitting the series 1-1, with each winning on the others’ home floor. Florida has been incredibly inconsistent this year, but when they’re on, they’re really good, and they’ve showed to matchup well with LSU in the two previous meetings this year. Add in the fact that LSU will still be dealing with the absence of head coach Will Wade, who was suspended last week after a wiretap showing him discussing paying players surfaced. I think the Tigers will be a bit distracted by that while Florida will be 100% focused on securing a bid, and I think they beat LSU here and ensure their season will continue.

The darkhorse for me here has to be Auburn. I’ve been lower on the Tigers than most throughout the season, but the way my bracket has shaped out, they’ll face Missouri, South Carolina, and Florida, three teams with a combined record of 47-45, an absurdly easy path to the finals. Assuming they can get through those three teams and into the title game, they just beat Tennessee on Saturday and were just two points shy of Kentucky at Auburn Arena, so they’ve proved they can hang with the big boys. I really like Auburn’s ability to shoot and then force turnovers on the defensive end, and you really have to keep an eye on them as a darkhorse SEC Champion.

So, we’ve advanced Auburn through to the title game, but who will their opponent be? To see, we’ve got Tennessee vs Kentucky III. The two games between the two teams combined for a score of 140-138 (in favor of Tennessee), but don’t let that trick you, they weren’t close. Both teams murdered their opposition at home, so it’ll be interesting to see who will have the edge on a neutral court. Both teams have lost just three games this calendar year, but Tennessee’s losses were centered in the back end, finishing the season 4-3 after starting 23-1. It is hard to say if that was just regression to the mean or if a legitimate factor caused the cold streak, but it is worrying to me that this team, that was AP #1 for like a month, finished third in their own conference, that could be a huge hit to their morale. These teams are so evenly matched, but that cold streak to end the year scares me off of Tennessee a little bit, so I’ll pick Kentucky to advance to the SEC Title Game against Auburn.

The last time these Auburn and UK played, Auburn got smacked: 80-53. The Tigers did keep it close in the first meeting back in January, but still came up short. I’ve been lower than KenPom on Auburn all season, and while they have shown a lot in the past couple weeks with wins against Mississippi State, Alabama, and Tennessee to end the year, I still just don’t trust them enough to win four games in four days, something that is rarely done in all of the conference tournaments throughout the country. I’m tempted by the depth of Auburn’s bench and their ability to get hot from three, but Kentucky is just too talented. They defend well, they crash the glass on both ends, they get to the line at one of the highest rates in the country and hit their free throws when they get there, this is an all-around excellent team and a no-doubt final four contender that could get that final one seed come Selection Sunday, most likely at the expense of the Duke-Carolina ACC Semifinal loser.