Seven teams from the SEC own a champion probability over five percent, and of those six, Texas A&M, the eight seed, stands out, as they stand just behind the top four seeds in probability. As for those top four seeds, they are separated by just nine percent, with Florida coming in first, followed by Tennessee, Kentucky, and then Auburn, the one seed who is seeing very little respect. 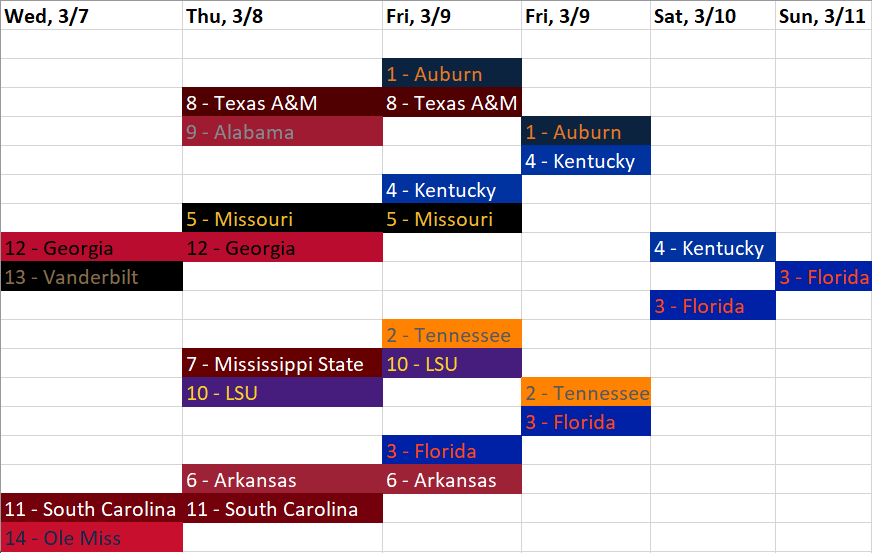 My early round upset does not come in the 8-9 or 4-5 game for once! For this one, we travel to the second half of games on Thursday, where I’ll take tenth-seeded LSU over Mississippi State. These two teams find themselves on the fringes of the bubble, and would probably need a trip to the SEC Title Game to justify conversation of inclusion, but if you asked me which team I thought had a better shot to do it, I would say LSU without hesitation. The Tigers beat Mississippi State on Saturday, and it wasn’t even close. Tremont Waters led LSU to a  78-57 win, and under a week later, I’d expect history to repeat itself.

I picked the top four seeds to make it to the semifinals, so it was a little harder finding a darkhorse for this tournament, but I’d say that Texas A&M probably has the best shot of disrupting the status quo. The Aggies will have a very tough road, needing to beat Alabama, Auburn, Kentucky/Missouri, and Florida/Tennessee in the span of four days, but this team has the talent to do that. A&M was ranked in my top five at one point this year, and while they have been wildly inconsistent, there is no team in the conference that can beat them when they play their A game. Texas A&M also comes into the tournament having won three straight, including a win over first-round opponent Alabama on Saturday.

The SEC Tournament feels wide open. Missouri is a mystery, Texas A&M is a darkhorse, and Alabama is right now my last team in the field and a desperate team is a dangerous team. With all that said, I’m taking the top four seeds to advance to the semifinals, but there is no telling what will happen when we get there. I happen to think that Auburn is the best team in the conference (my computer disagrees), but the Tigers will have to face Alabama or Texas A&M on Friday, both teams they’ve lost to earlier this year. I think they’ll get through Friday, but for damage control sakes, I have them going out on Saturday, as I don’t want one of my finalists picks to go out on the first day. Because of that, I’ve got Kentucky advancing to the finals from the top half of the bracket. The Wildcats won four of their final five games.

I also didn’t pick the 2nd seeded Tennessee Volunteers to make the finals. The Vols have won five of their past seven, but four of those five wins were by single digits, and as I say: The bill always comes due. I would probably pick the Vols to go to the finals if they were on the other half of the bracket, but they got unlucky and drew my projected winner Florida on their half.

As for that Florida team, the Gators are on fire, ranking fourth in the country in Sagarin’s “recent” rating. As I said, the Tennessee game will be tough, as I would’ve picked UT to make the finals if they were on the other half of the bracket, but if they can get through that, they will face a Kentucky team they defeated by 13 on Saturday. With an SEC Championship on their resume, there is a chance that this Florida team could climb as high as a top four, regional protected seed, potentially setting up a rematch from last year’s tournament with Virginia in the Sweet 16.