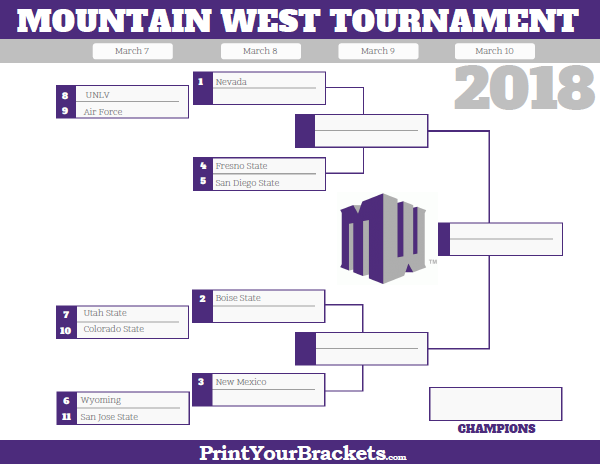 Nevada is obviously 1st in the conference champion probabilities, but San Diego State is right on Boise State’s heels for the #2 spot. Looking down the list, there are no real surprises other than Brian Dutcher’s team, which comes into this tournament on a big winning streak, but more on that in my “early round upset” and “darkhorse” categories. 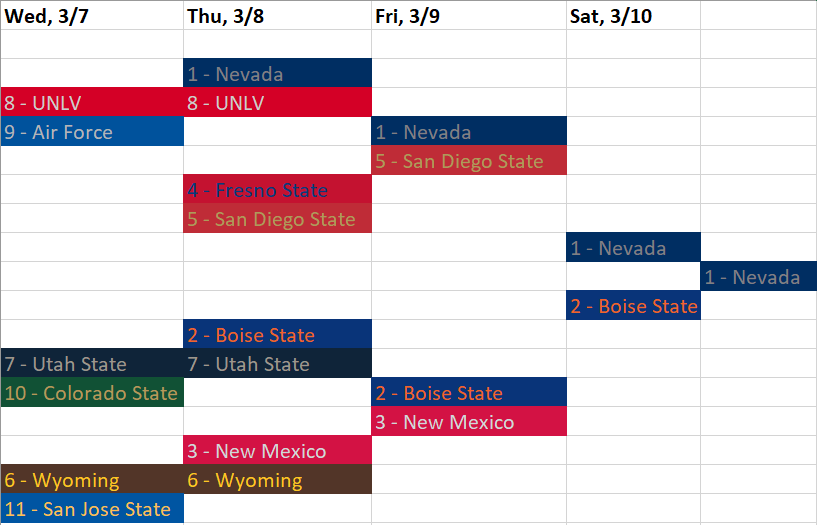 My early round upset for the Mountain West Tournament is San Diego State over Fresno State in the 4 vs 5 game. The Bulldogs swept San Diego State in the regular season, but both games were over a month ago, and Fresno State has lost two of their final three heading into this tournament, both wins were against sub-100 teams, and the only win was against Air Force, ranked #239 in KenPom.

My darkhorse for the Mountain West Tournament is San Diego State. The Aztecs are coming into this tournament as winners of six straight, including victories over the two best teams in the conference, Boise State, and Nevada. As I mentioned in my early round upset portion, getting past a Fresno State team that swept them in the regular season will be tough, but if they can do that, they will be faced with a matchup against a Nevada team that they beat on Saturday.

Check out my thoughts on San Diego State in my darkhorse section, but my other semifinalists are New Mexico, Boise State, and Nevada. As for New Mexico, the Lobos finished in the KenPom top 50 every year from 2008-2014, but the past few years, they’ve dropped off. This year will be a first step to getting back there, and while I don’t think they’ll get by Boise State in the semifinals, they do come into the tournament on a five-game winning streak, including one over likely quarterfinal opponent Wyoming on the road.

I’ve got Nevada avenging their Saturday loss to San Diego State in the semifinals. I love the Aztecs, but that game definitely felt fluky, because Nevada led for most of the first half, and when the two played earlier this year, Nevada won by 25.

Now, assuming we get there, Nevada vs Boise State in the finals should be a lot of fun. When the two teams played in the regular season, Nevada won both times, but both games were awesome to watch. The trend should continue, and these finals should be fun too, but I’ve got another trend continuing, as I’ll pick Nevada to win in a close one. Any bubble teams better cheer for Nevada in this one, as Boise State winning would mean that Nevada would use up an at-large bid, kicking some poor bubble team out of the tournament.