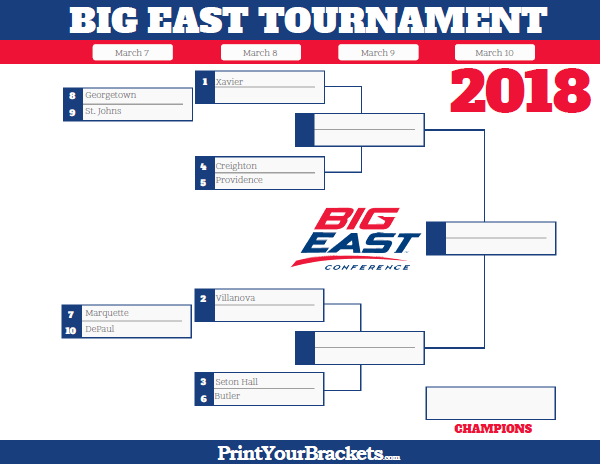 Villanova, despite not being the one seed, is a massive favorite in my computer’s simulations, winning them 41.3% of the time. Going down the list, it is largely out of order, as Marquette and DePaul are the only two teams where their seeding matches their placement in the win probability graph. Creighton is the only school outside of the top two with a win probability greater than 10 percent. 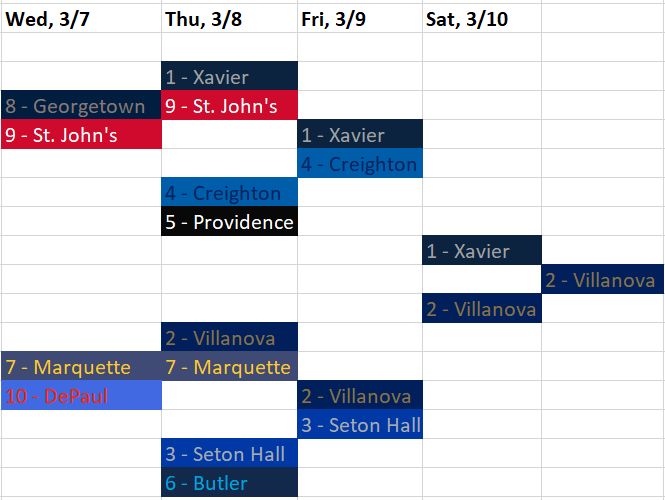 The early round upset for the Big East seems like it would be an easy one, as I’ve got St. John’s over Georgetown. The Johnnies made national headlines earlier this year when beating Villanova and Duke. Including those two, St. John’s has won five of their past eight, fantastic for a team that was on an 11 game losing streak, and two of those three losses were by single digits. When the Red Storm matched up with the Hoyas earlier this year, Georgetown won both times, but those games were decided by three points or went to overtime. Both of those games were also before the Johnnies’ recent uptick in luck, and while Chris Mullin’s team is coming in hot, Georgetown has lost eight of their final ten, including four in a row. Sometimes you have to go with the best player on the court, and that is Shamorie Ponds.

My darkhorse for the Big East has to be Creighton. I’ve been high on the Bluejays (and Butler too!) all year, and they have proven that they can hang with the best in the conference. Creighton beat Villanova on February 24th, and the last time they played Xavier, it was a one-point defeat that the Bluejays should have won. This team has certainly been wildly inconsistent, and half of their losses have been by double-digits, but when this team is playing at it’s peak, they can contend for a Big East title. Creighton also has the added advantage of starting the tournament with Providence, a team that should not be much for the Bluejays to handle.

Check out my breakdown of Creighton in the darkhorse category, but it is time to get into some of my other semifinalists, starting with Seton Hall. The Pirates will have to beat Butler to make it into the semis, a Butler team they swept this year, including a win over the Bulldogs on Saturday. The Bluejays have won four of five, and are a prime bet to make it to the semis, but neither Seton Hall or Creighton has a chance of changing a title game that seems to be inevitable, Villanova against Xavier.

Xavier finished the regular season in sole possession of first place, despite being swept by ‘Nova during the regular season. Losing by a combined score of 184-144 over the course of the two meetings. Needless to say, I don’t see Xavier’s Villanova woes stopping anytime soon. In fact, since joining the Big East, Xavier has beaten Villanova just once, ever. As long as they make the championship game, both of these teams should be one seeds in the big dance. This is a topic for another article, but I would say that Xavier is primed for an upset, as they would be the weakest one seed in my memory. The Musketeer rank 15th in KenPom because while 27-4 looks good, they are statistically the luckiest team in a power conference, and the bill always comes due.