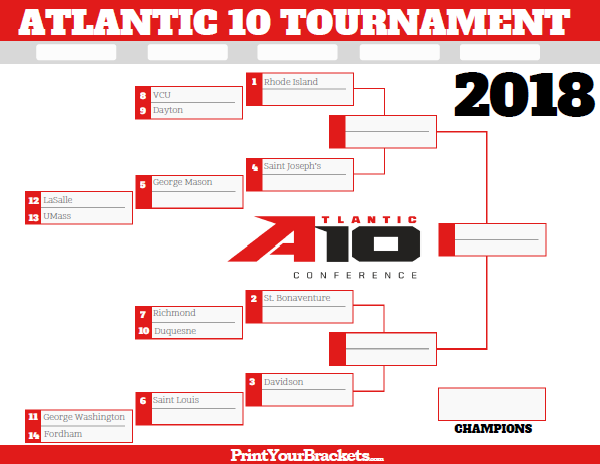 Rhode Island, who in my normal computer metrics ranks tops in the A10, comes in third in my tweaked version. The version I use for conference tournaments uses recent results much more heavily, and Rhody lost three of their final five games, including each of their final two, most prominently a 30 point loss to Saint Joseph’s that caused them to drop 20 spots in KenPom. Those two wins were against the #12 and #9 seeds in this tournament, and in the game against La Salle, the Rams needed OT to get the win.

This might be the biggest seeding gap for any of my early round upsets, but I’m confident in it. I’ve got twelfth-seeded La Salle over the five seed. George Mason. La Salle, despite being a much lower seed, ranks over 60 spots higher than George Mason on KenPom. The only time these two teams played, which was earlier this month, La Salle beat the Patriots, and I expect history to repeat itself, as I’ve got the Explorers advancing to the quarterfinals.

There isn’t a darkhorse for the Atlantic 10, at least not in the traditional sense. No team outside of the top four seeds has a greater than two and a half percent chance to win the title via my computer simulations, so I’ll take a team from within those top four that hasn’t gotten a lot of national attention but should, Davidson. The Wildcats have beaten Rhode Island, St. Bonaventure, and Saint Joseph’s already this year, and if they win the conference title, they will pop the bubble of some team hoping to get into the NCAA Tournament, because Rhode Island and St. Bonaventure will take up at-large spots.

The top four seeds seem locked into those four semifinal slots to me, so I’ll go into my picks for the two finalists. On the top half of the bracket, I expect Rhode Island to get their revenge on Saint Joseph’s for their senior night drubbing on Tuesday. That game certainly seemed to be an anomaly, as the Rams looked to be swept up in the emotion of their senior night on the day of that 30 point loss. In the bottom half, we’ll get the oh so interesting matchup of Davidson and St. Bonaventure. The two split the season series, with St. Bonaventure winning the more recent matchup in triple overtime last week. That game was one of the best I’ve seen all year, and if we get anything close to that, this semifinal will be epic. At the end of the day, I’m going to pick the team with the best player on the court, and that is St. Bonaventure and Jaylen Adams.

Assuming we get a Rhode Island-St. Bonaventure final, bubble teams around the country will breath a sigh of relief, but viewers around the country should still tune in. The two teams split the regular season series, but in the third and final matchup, I’m going to take St. Bonaventure to pull an upset. As I said in my champion probabilities section, Rhode Island comes into March coming off of a down stretch. St. Bonaventure is much the opposite. The Bonnies have won 12 in a row, including games against all three of the other semifinalists. Give me Jaylen Adams to lead SB to a trophy.