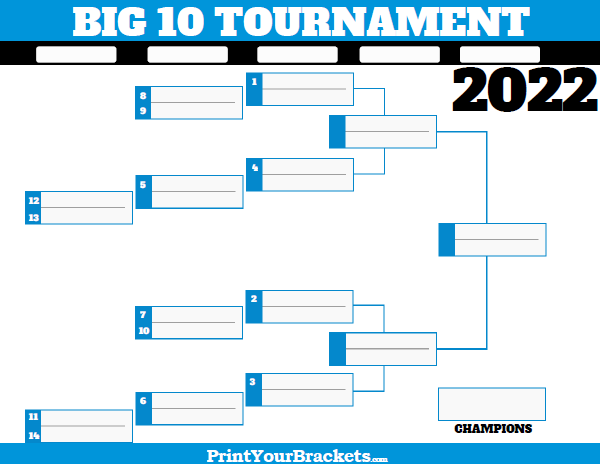 Interestingly enough, Michigan State is the highest-rated team in the conference, but their much tougher path to the finals means the Spartans come in over 1% lower than Purdue in champion probability. 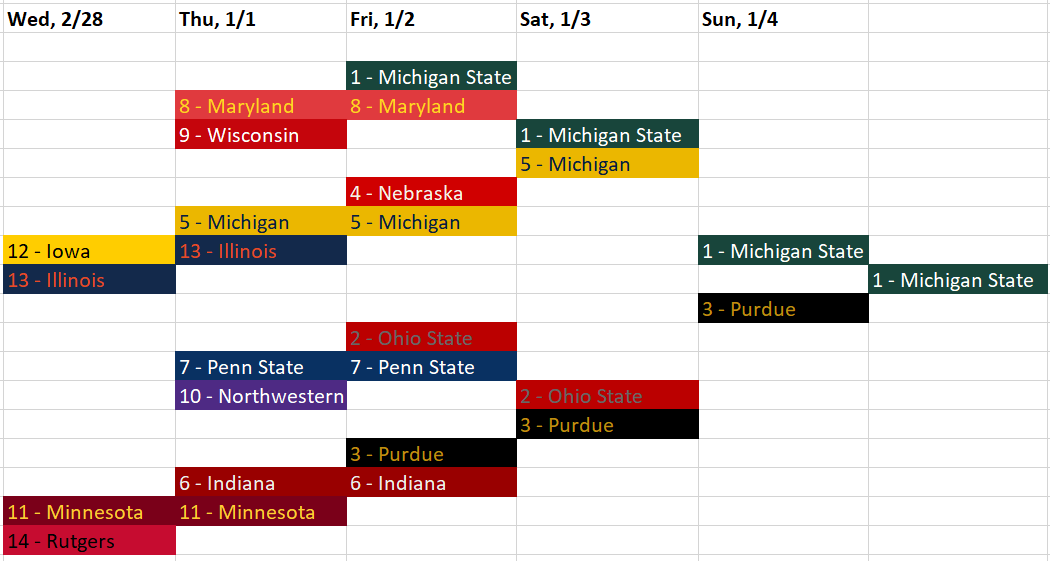 Breaking Down the Picks

My early round upset for the Big Ten Tournament is Illinois over Iowa on opening day. These early games might not be worth many points in your bracket pool, but it is always fun to have the lead after the first day of games. The two teams both own a 4-14 record and are practically even in KenPom, the Hawkeyes rank 100th, and the Illini rank 101st, so this is only a slight upset. Iowa comes into the tournament losers of six of their previous seven, while Illinois has won two of their previous four, the losses coming at the hands of the two favorites in this tournament: Michigan State and Purdue. Expect Illinois’ defense to frustrate a young Iowa team.

The clear darkhorse team to me in this tournament are the Michigan Wolverines. The Wolverines will have to play on Thursday, unable to rest until Friday like the other favorites, but there is a lot to like about this team. The defense is one of the best in the nation, and they never turn the ball over on offense. Although they were relegated from the four to five seed based on a head-to-head loss against Nebraska, I feel good about their chances in a rematch. Michigan comes in hot, winners of five in a row, including wins over Ohio State and Penn State, and John Beilein’s team ranks third in the nation in the Sagarin recency rankings. Michigan State may be too good for the Wolverines to get past in the semis, but if they were on the bottom half of the bracket they would be the favorite to make the finals.

I think Michigan State, Michigan, Ohio State, and Purdue are a clear top four in the conference and will be most people’s picks to make the finals. The only other I could possibly see is a Penn State team desperate to make it’s way back onto the bubble upsetting Ohio State for a third time this season. As you can tell, I’m much less confident in Ohio State than most, and I instantly penciled Purdue into the finals when I saw the bracket. On the top half of the bracket, the likely semifinal matchup is Michigan vs Michigan State, and those are probably the two best teams in the conference right now. The only time those two played, Michigan went on the road into the Breslin Center and won by double-digits. I expect Michigan State, which hasn’t lost to any team since that January 13th matchup, to exact their revenge on the Wolverines and reach the finals, where they will face the Purdue Boilermakers.

While I see Purdue as a clear #1 on the bottom half of the bracket, it is tough to envision the Boilermakers knocking off Michigan State. The last three times Purdue played in a KenPom “A-Level” game (top 50 teams adjusted for home or away), the Boilermakers have lost, including a 68-65 defeat at the hands of Michigan State. Miles Bridges and the Spartans will get the job done again, and I expect MSU, the only team with a top ten offense and defense, to continue their long winning streak into March.