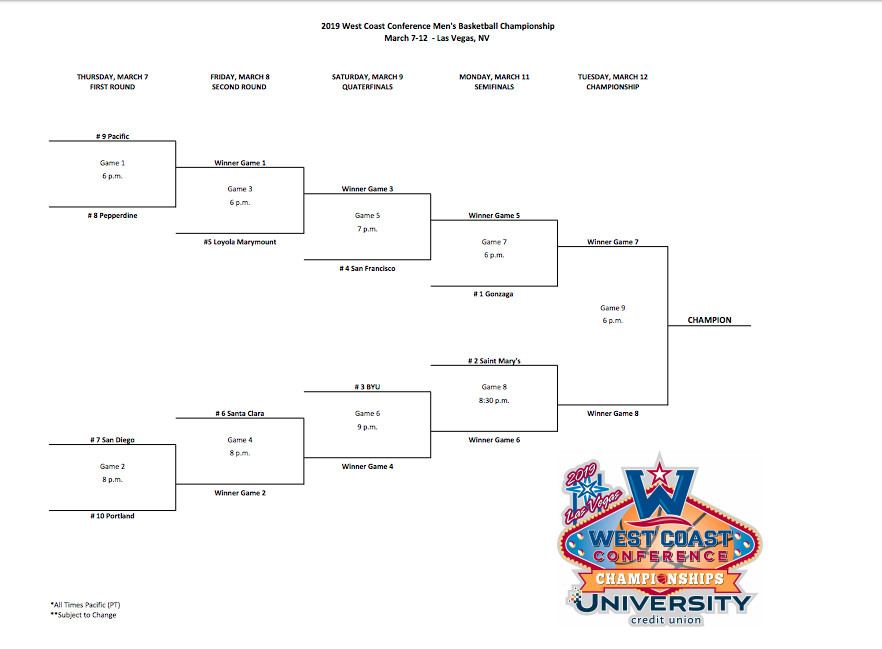 I’m going with a San Diego Toreros semifinal run here. USD rates out as the #5 team in the conference according to KenPom despite ending up as the seven seed. They shoot the ball well which I like in a tournament setting, they’ve got one of the best defensive rebounding rates in the country, and they hit their free throws. USD gave Gonzaga their closest game of any team in the WCC (still losing by double digits) this season and BYU just hasn’t impressed me when I’ve watched them this year. They play at quite a quick tempo and the offense is a lot of fun to watch, but it is tough to win in a tournament environment without a solid defense, and the Cougars rank 287th in the country in opposing 3-point percentage. BYU did sweep the season series, but one of those games went to overtime, and I like this matchup too much to think BYU will beat the Toreros for a third time this year.

Gonzaga has to be an overwhelming favorite to win this tournament, the Bulldogs went 16-0 in conference play, but there are some other really good teams in this conference. This is the best the WCC has been top to bottom in the history of the KenPom database. San Francisco and Saint Mary’s both floated in and out of bubble contention this year, and have proved they are really good teams, although both would probably need the auto bid to make the big dance. I think I’ll side with San Francisco as my top darkhorse pick. They don’t turn the ball over, shoot it well, rebound the ball well, and defend the perimeter. The Dons had a lead on Gonzaga with under four minutes to play back in January when they played in San Fran, and I think Frankie Ferrari (real name) and company are best suited to knock off the Zags, even though I won’t pick them to do it.

When a one-bid league has a national one seed caliber team, it becomes unfair. As much as like this San Francisco team, I’m taking the Bulldogs to mop the floor with them in the semifinals, and I’ll side with Saint Mary’s in the other semifinal, even against a really underrated San Diego team. Jordan Ford is an all-conference type of player, and I don’t see San Diego beating a third straight team they couldn’t take care of in the regular season.

This Saint Mary’s team is NCAA caliber good, but as usual, the Gaels didn’t schedule well enough to really be in at-large contention. Randy Bennett knows that you don’t get enough high quality wins in WCC play to build a tournament resume, but he (and the athletic department) still schedules cakewalk nonconference slates. This was the toughest non-con schedule SMC has faced in a little while, and it still ranked in the bottom half of the country. Gonzaga, on the other hand, schedules one of the toughest non-cons in the country year in and year out. The Bulldogs faced three of the current AP top 5 in the span of three weeks earlier this year. They did go 1-2 in those games, but picked up a neutral court win over Duke that earned them national attention and respect. Mark Few’s team beat Saint Mary’s by a combined score of 163-101 in their two meeting this year, and in the first matchup, Saint Mary’s didn’t hold a lead the entire game. If you were are expecting anything different, you haven’t watched this Gonzaga team. I think they wipe the floor with the competition and moonwalk into the #2 overall seed in the big dance, likely behind the ACC Champion.