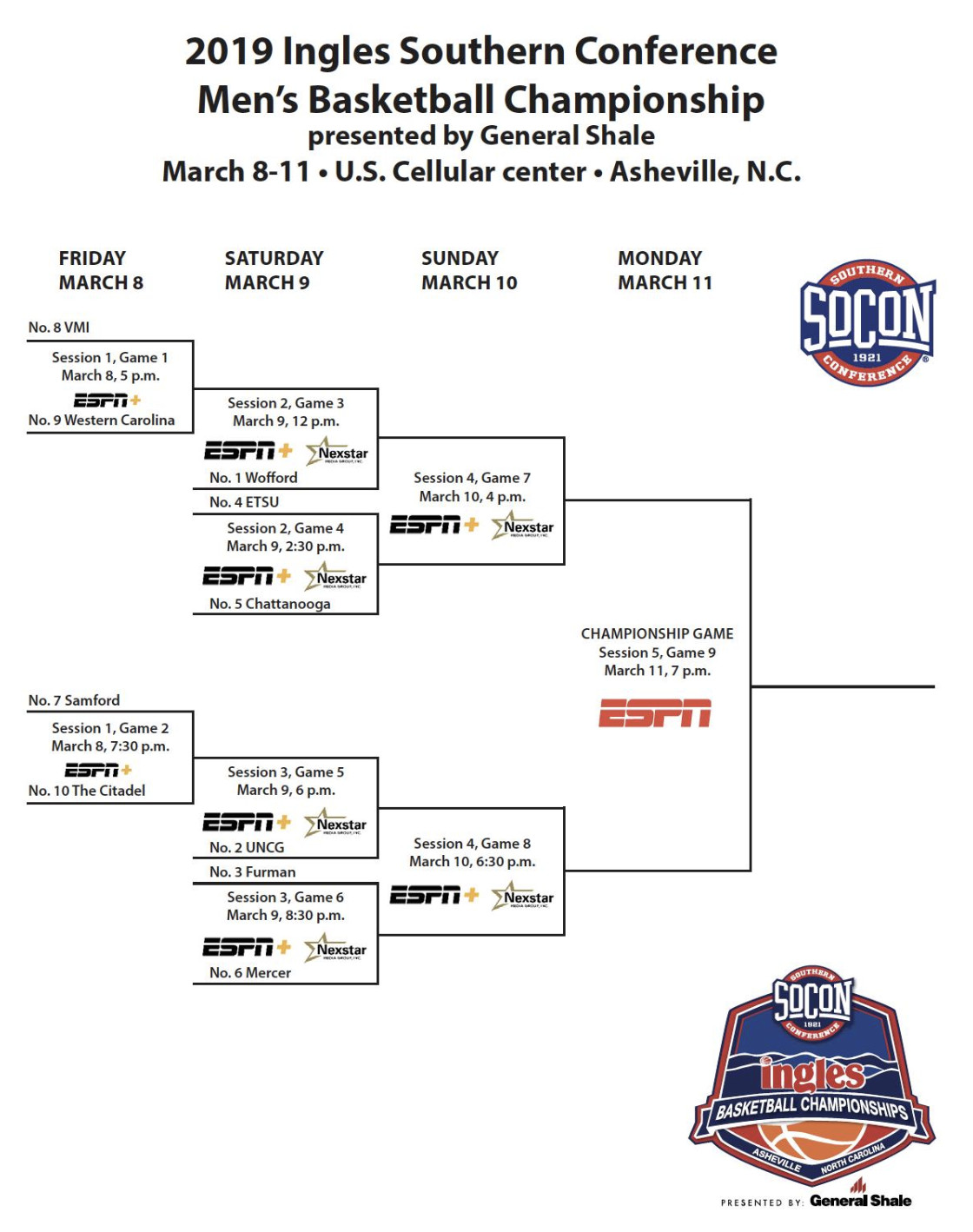 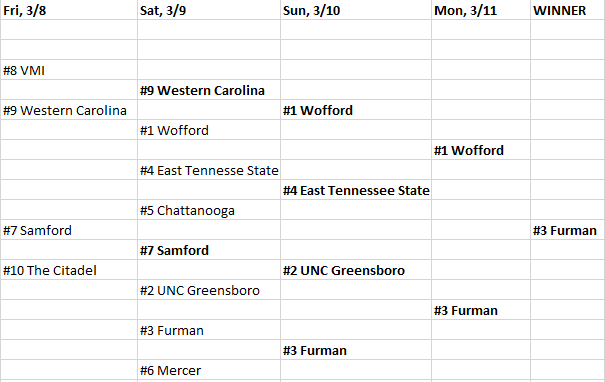 The SoCon is, by a solid margin, having its best year in the history of the KenPom database, but it has been almost entirely on the backs of the top four teams. The bottom of the conference is very much the normal for the SoCon, quite bad, and as a result, the conference has had the highest % of games being blowouts of any conference this year. My early round upset will come in the 8-9 game where I’ll take Western Carolina over VMI. VMI swept the season series, but both games were tight, and Western Carolina showed some stuff down the home stretch, taking both UNC Greensboro and East Tennessee State to the buzzer in the past two weeks. The Catamounts shoot the ball incredibly well for a 7-24 team (54.5 eFG% in conference play4th) and I always say I like that in a tournament environment so I’ll pick them as my upset.

If you really want to go out on a limb, let me throw out seventh seeded Samford over UNC Greensboro in the quarterfinals. UNCG actually rates out as the #4 team in the conference according to KenPom and Samford rates out as #5. The Spartans swept Samford in their two regular season meetings, but both were by single digits, and in conference play this year, UNCG was the worst team shooting the rock (50.1 eFG%). Plus, Samford will have the best player on the court in junior PG Josh Sharkey. Anytime a team shoots better and has the best player on the floor, that is a recipe for a win, and I’m not ballsy enough to call it outright, but keep an eye on that one. Should the Bulldogs get through that game to a semifinal matchup with Furman, they already beat the Purple Paladins on the road this year, and, assuming they’d face Wofford in the title game, Samford already took Wofford to overtime on the road this season, meaning if one free throw went differently they would’ve handed the Terriers their only SoCon loss of the season. It is a longshot for sure, and they’d need to win four games in four days to do it, but don’t count this team out.

I’ve damn near talked myself into this SoCon champion Samford thing… Anyways, we should get two awesome semifinals on Sunday with ETSU-Wofford, a matchup which already gave us an overtime game earlier this year, and UNCG-Furman, where the two teams split the season series by a combined score of 146-146. Starting with the former matchup (not to be confused with the Furman matchup), I like this ETSU team, and they’ve way over delivered on expectations, but Wofford is just too good. The Terriers are top 15 in the NET right now, top 20 in KenPom, and winners of 15 straight. They are the #4 shooting team in the country (57.3 eFG%) and I think they knock off the Buccaneers by something in the range of six to eight points. As for the second semifinal, I wouldn’t be shocked if we got another overtime game here. They split the season series, both winning at home, but I like Furman here for a few reasons. They shoot the ball better, first and foremost, and Furman Senior C Matt Rafferty is probably the best player in college basketball you’ve never heard of (63.1 eFG%, 21.7 DR%, great defender. The Purple Paladins come into this one winners of eight of their past nine, the only loss coming by eight to conference favorite Wofford, and I see them continuing the hot streak here and knocking off the Spartans. Thus, we setting up a rematch and a Wofford-Furman final.

Wofford dominated the competition in the SoCon this year, winning every single game, but Furman was the closest to knocking off the Terriers this year, losing their two meetings by just an average of 6.5 points, the lowest in the conference, and the Purple Paladins led Furman by two with just a minute to go in the Greenville matchup. It is impossible to deny, Wofford is the better team, and they should be favored here, but I just have a good feeling about Furman in this spot. They’ve proven they can win big games away from home as evidenced by wins @ Loyola (back when they were ranked) and @ Villanova. While Wofford shoots at an extraordinary eFG rate of 57.4, Furman isn’t that far behind (55.5), and the Purple Paladins are much better on the defensive end of the court. They’ve proven in the past that they can fluster the Terriers with their aggressive defense, but aren’t so aggressive that they foul (#6 in the nation in opposing FTA/FGA). Wofford has escaped so many times this year that it feels like they are due for a loss, and with the Terriers’ NCAA bid locked up weeks ago, and Furman likely needing a win here to secure a bid, I think that “X factor” of just who cares more comes into play here, and we get our first bid stealer of the 2019 season. Give me Furman to cut down the nets in Asheville as SoCon champions.