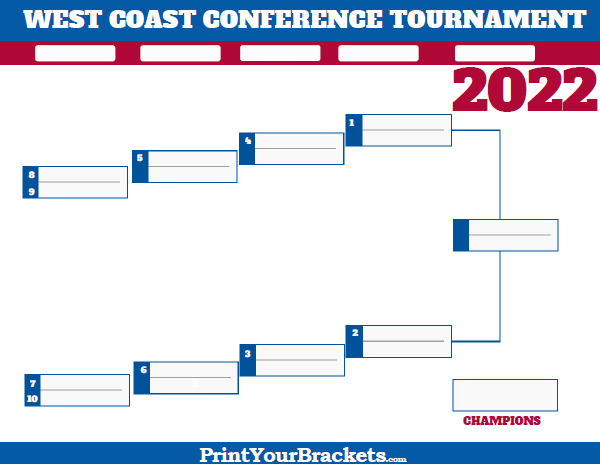 Not Surprisingly, Gonzaga is a clear #1 and Saint Mary’s is a clear #2. Not much else to see. BYU and San Francisco are the only other two teams with a greater than one percent shot. 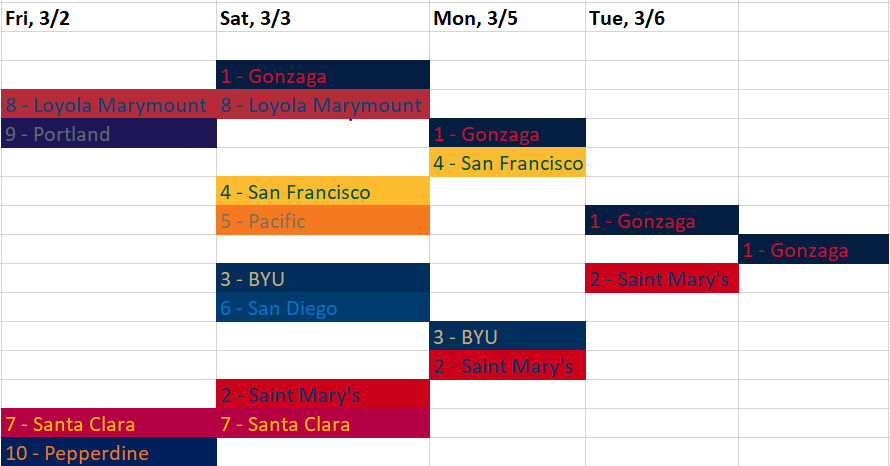 Breaking Down the Picks

Those early games might not be worth many points in your bracket pool, but it is always fun to have the lead after the first couple days of games. My early round upset for the West Coast Conference was going to be the sixth-seeded San Diego Toreros over the third-seeded BYU Cougars. The Toreros have won two of their last three, including wins against #3 BYU and #4 San Francisco, the only loss during that time period was a close five-point defeat at the hands of the kings of the conference, Gonzaga. However, you may notice that I didn’t pick the Toreros to actually upset BYU. That is because USD Head Coach Lamont Smith was placed on administrative leave following an arrest due to domestic violence charges. That could be a distraction to the team, and while if you focus solely on the court, these guys are playing like a unit, and are a great pick for an early round upset, I would proceed with caution.

I was going to put San Diego in this category before Sunday’s new broke, but honestly, even then I was tricking myself. There really isn’t any way to pick a team other than Gonzaga or Saint Mary’s to win the conference. The gap between those two and the rest is just so large. Gonzaga ranks 8th in KenPom, Saint Mary’s is at 19th, and then there is a big drop off before BYU at 75th, and another big drop off before San Diego at 123rd.

I’ve already talked about BYU, Saint Mary’s, and Gonzaga, so before I give my pick for the championship game, I’ll give a quick shoutout to my other semifinalist, and the only team not named Saint Mary’s or Gonzaga to beat Saint Mary’s or Gonzaga in conference, the San Francisco Dons. I have the Dons at 5th in the conference, behind the other three semifinalists and BYU, who face a much tougher battle in the quarterfinals. USF has won seven of their last eleven, the only losses coming to those four teams: Gonzaga, Saint Marys, BYU, and San Diego. They’ve played their quarterfinal opponent Pacific twice already this year, and are 2-0 in those games. To add to that, the Tigers are on a three-game losing streak. However, to think they will get past Gonzaga is crazy, but a semifinal run should do fine, which brings us to the big question, Saint Mary’s or Gonzaga?

Gonzaga and Saint Mary’s are the clear 1 and 2 in the conference. Seven of the past nine years, the two have met in the conference championship, a feat untouched by any two other teams in any other conference. Gonzaga is 5-2 in those seven meetings, and 7-2 all-time in WCC championship games against the Gaels when you throw in the 2004 and 2005 matchups. I’d expect that to continue here. Jock Landale is the best player in the conference (and maybe the country) but the team effort of Gonzaga led by Johnathan Williams and Killian Tillie will get the job done here. The two teams split the series during the regular season, both winning on the road. The game will come down to Landale, who had 26 points when the Gaels beat Gonzaga, but only four in the return game where Saint Mary’s lost. I expect Williams and Tillie to double Landale like they did back on February 10th, and if they can do it successfully again, I see it leading to another Gonzaga championship.