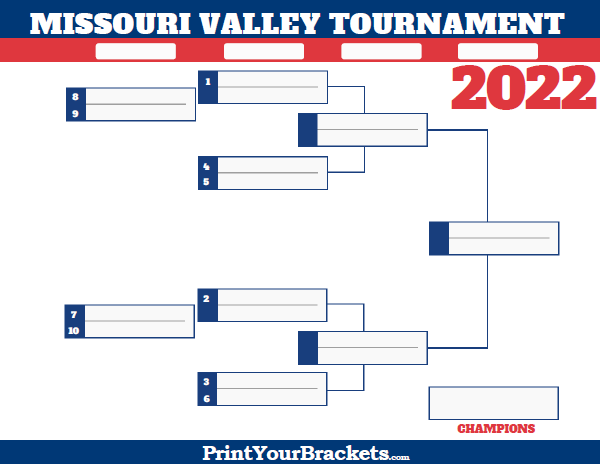 The Missouri Valley Conference is a very interesting case study. Loyola Chicago is 15-3 in the conference and ranks 46th in KenPom, but the rest of the conference ranges just from 113th to 159th. The parity in this conference is unparalleled in any other around the country. Because of this, you see only one team with a win percentage >15 (Loyola Chicago) and no teams with a win percentage <1. The 2nd seeded Southern Illinois Salukis come in 2nd in tournament champion probability, but they are actually the program’s 7th highest rated team. That is because the difference between two and seven is so small, and SIU has a much easier path to the title. 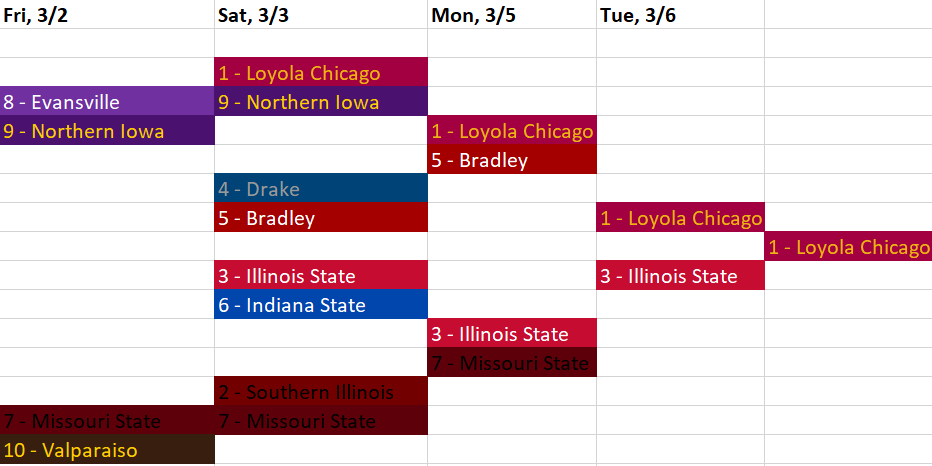 These early games might not be worth many points in your bracket pool, but it is always fun to have the lead after the first day of games. For this category, I’ll check out the 4-5 matchup, where I’ll take Bradley over Drake. The Braves have been hit or miss this year. They are the only team to beat Loyola Chicago in the Ramblers’ last 14 games, but they’ve lost eight games to teams ranked lower than them in KenPom, including two to Drake. I expect Bradley to exact their revenge on the Bulldogs, who come into the tournament losers of two straight, not being able to rebound to save their lives.

My darkhorse for this tournament is the seven seed, Missouri State. Despite being in the bottom half of the seeding list, the Bears are actually the second-highest rated team in the conference on KenPom. It was a tough year for MSU, as they went 7-11 in conference, but of those 11 losses, seven of them were by single digits, so this could easily be a team with a winning record (or a 14-4 record if all of those games went their way. They are one of three teams in the conference to have beaten Loyola-Chicago this year, and I expect them to add the #2 seed Southern Illinois to that list. MSU went 0-2 against Southern Illinois this year, but those games were decided by two points, and the other went to overtime where the Bears lost by one. The Salukis lost their last two games by a combined 50 points, and I expect SIU’s woes to continue in this tournament, so I’m picking Missouri State.

I’ve already talked about Missouri State and Bradley, but I haven’t had a chance to talk about the class of the conference and my predicted runner-up. I’ll start with the latter, the third seeded Illinois State Redbirds. ISU made waves last year after being considered for an at-large bid after the 17-1 in conference Redbirds were beaten by Wichita State in last year’s MVC Tournament Final. This years team lost a lot from 2017, including all five starters, and understandably so, they struggled out of the gate, but the Redbirds recovered. They’ve gone 5-3 in their past eight, with the only losses coming to Valparaiso and fellow semifinalists Bradley, and Loyola (they also beat Valparaiso during that stretch). I expect them to ride that momentum into the championship game.

If you haven’t figured it out by now, Loyola-Chicago is my pick for the champion of the Missouri Valley. There really is no way to pick someone else. The Ramblers rank 46th in KenPom, a full 67 (!!!) spots higher than the next placed team. This conference tournament is super unpredictable, but the one unpredictable part is Loyola-Chicago. You could honestly you could probably do a decent job by just penciling in LC to the finals and using a random generator for the rest. The Ramblers have the favorite for the MVC Freshman of the Year in Cameron Krutwig and the overall MVC Player of the Year in Clayton Custer. Expect the Ramblers to cruise in the title game over ISU, who they beat both times the teams played this year.