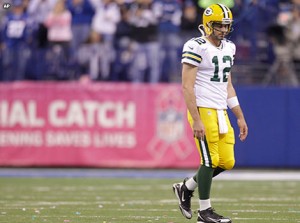 Arron Rodgers down after the loss to Colts.

Andrew Luck got a win he can really hang his hat on Sunday.Let’s Start in the third . The Packers were winning 21-3 but now it’s 22-21 Colts but not for long! Arron Rodgers over the middle to James Jones for the 8 yard TD.The 2-point Conversion failed so it’s 27-22 Packers.39 ticks on the clock Andrew Luck throws it to Reggie Wayne for the 4 yard Touchdown.2-point conversion is good. so it’s 30-27 Colts. Mason Crosby from the left hash 51 yards to send it in to OT and its no where close!Wide Right!

RG3 took a monster hit Saturday vs the Falcons in the Redskins 24-17 loss that they most likely would have won if  it wasn’t for Kirk Cousins 2 INT’s after Griffin went out.Griffin suffered a mild concussion and had to have some stitches and is likely to play next sunday against the Vikings but he may take a more cautious approach. Griffin tweeted Sunday night “I’m okay and I think after all the testing I will play next week.”

Drew Brees broke Hall of Fame quarterback Johnny Unitas’ half-century-old record in the Saints 31-24 victory over the chargers Sunday night  by throwing a 40 yard touchdown pass to Devery Henderson that made 48 straight games with a TD pass. “I guess you really couldn’t have written a better script for tonight,” Brees said. “To break the record, to get the win, and the fashion in which we won — really a complete team effort all the way around. Wisely spoken Brees, wisely spoken.