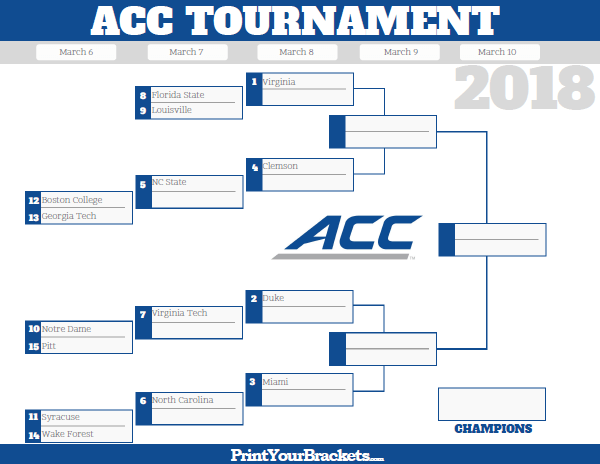 Duke comes in ahead of Virginia in my computer’s champion probabilities, although it is close between the two conference powers. North Carolina, the six seed comes in third, but other than that goes pretty much straight down the list, save for tenth-seeded Notre Dame being ahead of Virginia Tech now that the Irish have their star big man Bonzie Colson back.

My early round upset for the ACC Tournament comes in the 8/9 game, where I’ll pick Louisville over Florida State. The two teams split the series this year, both teams winning by four at the other team’s place. My problem with Florida State is that the Seminoles haven’t won a game away from home since February 3rd, and Brooklyn is a long way to travel from Tallahassee. On the other side, Louisville went on the road and beat seventh-seeded Virginia Tech less than ten days ago, and the ‘Cards should travel better to the tournament. Louisville should also have some added motivation, the ‘Cards are right on the edge of the bubble, while Florida State seems to be safely in.

Unless you count North Carolina as a darkhorse, I would say the underdog with the most ability to do some damage in Brooklyn would be the Notre Dame Fighting Irish. Notre Dame just recently got back star power forward Bonzie Colson, and with him in the lineup, the Irish beat the worst team in the conference at home, and lost to the best team in the conference on the road, which isn’t much to go on. That Virginia game was a lot closer than expected though, and with Colson in the lineup, Notre Dame won the Maui Invitational Tournament back in November, and if I had to single out one team to pull off a shocker and beat a top two seed before the semifinals, it would most certainly be Notre Dame.

North Carolina is the third-highest rated team in the conference in KenPom’s rankings, and by a wide margin, in fact, the four-way tie for the 3-6 seeds is the only way the Tar Heels got dragged down to the #6, if one shot went differently in their game against Miami on Tuesday, the Tar Heels would be sitting pretty as the three seed. This means that they will have to win one more game to get there, but I would pick UNC to get their revenge on Miami, and set up a third matchup with Duke in the semifinals.

My second semifinalist would be the Clemson Tigers. If the draws went a little differently, I might have picked CU to be upset in the quarterfinals, given that they are actually the ninth-best team in the conference according to my computer rankings, but a lucky draw featuring the computer’s #10 (NC State), #12 (Boston College) and #14 (Georgia Tech) means that I expect the Tigers to sneak into the semis before getting crushed by Virginia.

Speaking of Virginia, it seems that it is time to get into my finalists, the Virginia Cavaliers and the Duke Blue Devils. Virginia should be able to get by Clemson or NC State on Friday, in fact, my computer actually rates the potential Florida State or Louisville matchups on Thursday as more challenging. My other finalist would be the Duke Blue Devils, who I have getting by the Bonzie Colson-led Notre Dame Fighting Irish to make their way for a third matchup with North Carolina on Friday, although that game should be fantastic. As for the third meeting with the Tar Heels, Duke beat Carolina on Saturday, and I don’t think enough will have changed before the next  Friday for the result to change, and that includes the location. Duke is the best offensive rebounding team in the country, and that should get them into the finals.

As for those finals, I will get to see a rematch of Virginia and Duke on Saturday. The first year I went to the ACC Tournament, in 2014, these two teams faced off, and we’ve gotten a different champion and a different runner-up every year. 2014 was, of course, Virginia over Duke, then we got Notre Dame over North Carolina, North Carolina over Virginia, and most recently, Duke over Notre Dame. However, I don’t see the pattern repeating, and even as a native of the state of Virginia, I’m going to pick Duke to win the tournament crown.

Virginia has nothing to play for, at least in terms of seeding, the ‘Cavs will be the #1 overall seed on Sunday whether they lose to Louisville on day one or win the whole thing. Duke on the other hand, needs a victory on Saturday to get onto the one line at all. Marvin Bagley went for over 30 points when these two teams first played, and Virginia has won their previous two games by just six combined points against the nine and ten seeds in this tournament, so they already seem to be losing motivation. As much as I hate to say it, give me the Dukies.