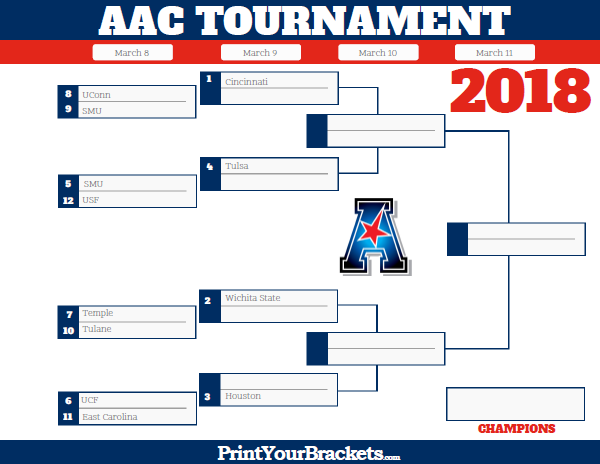 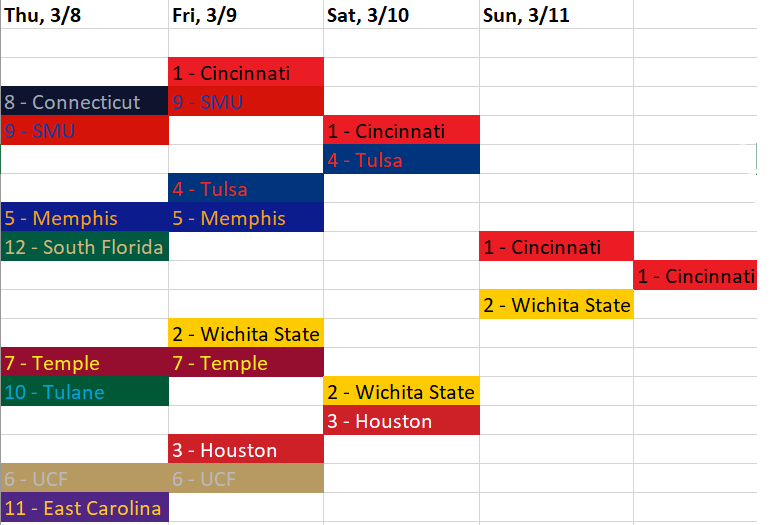 I’m going to guess that SMU will be favored over Connecticut, but it technically would be an upset seeding wise. The only time these two teams played, UConn won, but that game was at Connecticut and was decided by single digits. I expect SMU to get their revenge on Thursday, and advance to the American Conference quarterfinals on Friday. SMU has played wildly inconsistently, as they’ve beaten teams like Arizona and Wichita State, but also own losses to Tulane, Memphis, and USF. Assuming we get the best of SMU though, this should be a day two team.

I’m going to say that my darkhorse for the American is Tulsa. The Golden Hurricane are 19-11, but haven’t gotten much national buzz due to six KenPom sub-80 losses. Maybe they should be getting more attention though, as Tulsa has won eight of their past nine, the only loss coming on the road by single digits to top seed Cincinnati. To win the tournament and earn a berth to the big dance though, they’ll have to avenge that loss from February 25th.

I’ve already mentioned Tulsa in my darkhorse portion of the column, and my other three semifinalists are the obvious ones: Houston, Cincinnati, and Wichita State. Those three teams all are locked into NCAA Tournament berths, and are ranked in my top 25, but for each of them, a conference tournament crown would be a big deal, as none of the three have won the conference tournament since the inception of the American Athletic Conference. None of the three should have any trouble making it to the semis, as after the top three teams (all in the top 25) there is a big drop off before the next placed team in KenPom at #87 in the SMU Mustangs.

Assuming they get there, this would lead to a Wichita State vs Houston matchup in the semifinals. The two teams split the regular season series, both winning by double digits at home. When it comes time to pick these tournaments, I always like to look to see who is hot, and Wichita State has won seven of their final eight, with the only loss being by just one point against top-seeded Cincinnati. Because of that, I’ll take Wichita State to go to the finals and set up a third matchup with Cincinnati, who will have breezed by a Tulsa team that they beat just over ten days ago.

So in the finals, we will get to see Wichita State vs Cincinnati III. Both teams won by less than five points at the other teams home court, but now it will be played at a neutral site. I struggled with my pick for this game for a long time, but at the end of the day, Gary Clark and Jacob Evans are probably the two best players on the floor, and Cincinnati’s defense is the best unit in the conference. Last Sunday Cincy went to Wichita and won, this Sunday, they’ll do it again.