My Computer agrees with me and places West Virginia as the team with the best shot to win the tournament. This may have something do with the fact that Kansas will have to potentially face Oklahoma State on Thursday, a team that they were swept by in the regular season. The percentages also agree with my by placing TCU well ahead of their first round opponent, Kansas State. 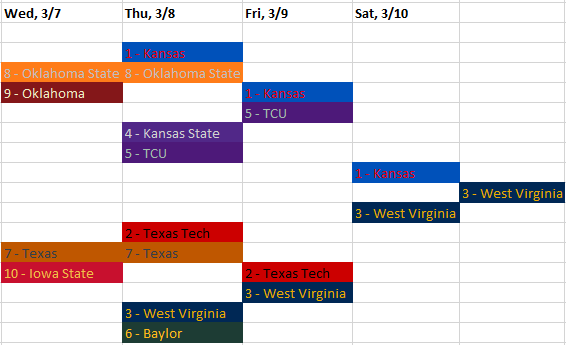 My early round upset for the Big 12 tournament comes in the 4-5 game, where I’ll take TCU over Kansas State in the battle of the two purple schools from the Big 12 Conference. Many see K-State as lucky to have landed in the four-seed spot, as the Wildcats actually rank eight in the conference in KenPom. These two played just this past Tuesday, where TCU beat K-State by seven. The two split the season series, both winning at home by single digits, but TCU’s win was much more recent, and the Horned Frogs come in having won four of their past five, while the Wildcats dropped two of their final three games in the regular season.

In a conference with just ten teams, it is tough to always find a true darkhorse, but for me, the Big 12 has two contenders: Texas and Baylor. Both were part of my final eight teams in the field, and you could see those two wanting to make sure they don’t leave any doubt when it comes to their selection to the big dance. Texas has what I would consider a must-win game against Iowa State on Wednesday, but assuming they get through that, these two would have to face the #2 and #3 seeds, where a win would lock up a berth to the big dance. These guys have the most to lose, so watch out.

I’ve already talked about TCU, so let’s get to my other semifinalists, starting with Texas Tech. The Red Raiders have had an up and down year, where at points I was sure they would earn the conference title, but in the end it was taken by the Kansas Jayhawks once again. Texas Tech is still a top ten team on KenPom, and they should get by a Texas team that they beat the last time the two teams played, but I don’t think they will get much farther than the semifinals. Keenan Evans is terrific, but the guard play is great all around the conference, and TTU has lost four of their last five, and coming into March on a losing streak is never a good sign.

Now let’s get into my finalists, Kansas and West Virginia. The two teams rank 12th and 13th on KenPom. As for the Jayhawks, it was business as usual. Everyone doubted them (including me), but in the end, they pulled out yet another Big 12 regular season championship, and they won this one outright. Their projected opponents, the West Virginia Mountaineers, also had a crazy year, and are the only team that my current #1, Virginia, has played and not beaten.

I’ve been high on the Mountaineers all year, and while they were swept in the regular season by Kansas, both of those games were within single digits, and WVU led late in both of them. Both teams come into the tournament off of a loss, and I’ll give the edge to the senior leadership of Jevon Carter to knock off the Jayhawks, clearing a way for Duke to earn that fourth #1 seed in the Big Dance.